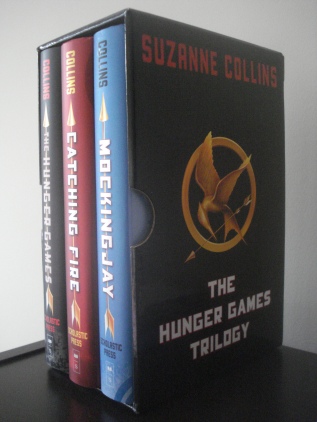 It’s March and you know what that means??  The Hunger Games movie comes out this month!!

I am SUPER pumped!  Sometimes I watch the movie preview, just for fun.  Or if I’m watching something I DVR’ed and I notice a preview while I’m fast-forwarding the commercials, I’ll stop to watch it.

Before I knew about the upcoming movie, I had heard about The Hunger Games books on the internet (I believe it was the Cookbook Queen who had mentioned it in some post).  I didn’t think too much about it until I was at a movie and saw the preview for The Hunger Games movie and became intrigued.

I can’t watch a movie based on a book without reading the book first (except I made an exception in the case of the Narnia movies and the last Harry Potter movie) so I asked for the first Hunger Games book for Christmas.

I don’t know what I was thinking.  Why did I only want the first book?

Thankfully, my parents had the forethought to buy me the complete trilogy boxed set and it was THE BEST CHRISTMAS PRESENT EVER!

I started reading the first book and Hunger Games pretty much became my life until I finished Mockingjay.  I spent all my free time reading them.   I stayed up past my bedtime because I couldn’t put them down.  I flew through The Hunger Games in about a day.  The suspense!  I needed to know what was going to happen!  After book number one I immediately started Catching Fire, and once I had finished that, the ending shocked me so much, I NEEDED to start Mockingjay.

I don’t know what I would have done if I’d only had the first book.  I would have been running out to the bookstore, that’s for sure.  What did people do when the books first came out and they had to wait for the next one to be published?  I don’t think I could have handled that.  Note to self: Always wait for series to be completed before starting to read it.

I don’t think a book or series of books has ever moved me in the way these ones did.  I became so attached to the characters.  Once I’d finished Mockingjay, I couldn’t stop thinking about the series and the ending.  I re-read the ending.  I’m not gonna lie, I shed a few tears.  (And then I watched the Big Miracle movie preview and shed a few more tears).

I desperately wanted someone who had read the books to discuss my thoughts and feelings with.  So the BF read them, and although he didn’t have much of an opinion on them (other than they were “good” and President Snow was his favorite character) or share my feelings, he listened to me as I went on about them (as I sometimes go on about stuff).

I need more satisfaction than that, so let’s discuss.

I’m going to talk about the ending, so if you haven’t read the series, you might want to stop reading.  Or what you SHOULD do is go read the trilogy and come back.  Don’t worry, I’ll wait.

At first I couldn’t believe Suzanne Collins chose to end the series the way she did, but after I re-read it, it made more sense to me.  Katniss never would have murdered President Coin if she hadn’t allowed Prim to join the war, putting Prim in a position to be killed by the bomb.  And if Coin had become the President of Panem, then oppression would have continued, just a different kind of oppression from the Capitol’s.  So I guess Prim had to die for the sake of the story.  I’m not happy about it though.

And what was with Katniss agreeing to a final Hunger Games with the children of the Capitol’s officials?  To avenge Prim’s death?  But Prim wouldn’t have wanted more people to die.

Once Finnick teamed up with Katniss and Peeta in Catching Fire, I pretty much fell in LOVE with him!  I have a picture of Finnick in my head and I hope whoever they find to play him in Catching Fire does my vision justice.  WHY DID FINNICK HAVE TO DIE???   The Star Squad’s mission through the Capitol didn’t even accomplish anything, and Finnick ended up dying.  What a huge waste!  When I read about Annie and Finnick’s baby in the epilogue, my heart broke.

Gale.  Let’s talk about Gale.  I was SO in love with Gale in the first two books, and part way through Mockingjay.  I felt like he was the one Katniss was meant to be with, not Peeta.  I was totally Team Gale.  I loved that Gale and Katniss were best friends and protected each other and their families.  When Gale promised not to let Katniss’s family starve right before she left for the Hunger Games, I swooned.  At the end of Catching Fire when Gale told Katniss that District 12 had been bombed, but he got her family out in time, my heart melted even more for him.  I don’t think Katniss should blame Gale for Prim’s death.  The theory of the attack may have been his idea, but he NEVER would have wanted it to be used against Katniss’s family.  It breaks my heart that Katniss and Gale aren’t even friends in the end.

And Peeta.  I’m not even happy with Katniss ending up with Peeta, because the Capitol ruined Peeta’s love for Katniss when they hijacked him.

Despite my issues with the outcome, I still love the series!  Maybe not having a fairy tale ending is important to show readers that there is hope and you can rise above tragedy and rebuild what is broken (but I wish Katniss and Gale had rebuilt their relationship… at least they could have been on speaking terms.  Why did he move to mean old District 2??).

I will definitely read all three books again!

* Disclaimer:  I realize I am by no means a literary expert.  I’m just a fan of the books and wanted to share my thoughts on them.  I am sure my opinions more closely remember those of an infatuated fifteen year old girl.