I was a little slow firing up my grill this season for a couple of reasons.

1.  I ran out of propane last fall and didn’t refill my tank until, oh the middle of June because I have issues with getting stuff done.

2.  My BBQ had blown over last winter (probably due to lack of a full propane tank to weigh it down) and I was afraid something might have happened to the propane connection and that I was going to blow up when I lit it.

3.  My deck has been taken over by wild squirrels (well possibly just one or maybe two different squirrels). 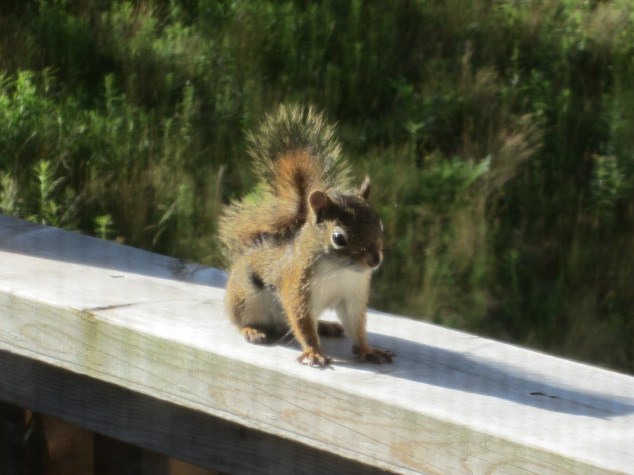 In the past four years that I’ve lived here, before this year I had seen a squirrel on my deck maybe twice.  Now he shows up almost daily.

He shouldn’t even be on my deck because a) I live in an apartment on the second floor and b) there are no acorns out there.

Michael says he’s building a nest in my BBQ, which he very well may want to.  Add that as #4 on my list of why I was hesitant to grill this year.

You may say, “Well Karen, he’s just so darn cute.”

To which I would reply, you’re crazy!  Look at those beady little eyes and those claw like fingers.  I agree with Carrie Bradshaw, who wisely said, “A squirrel is just rat with a cuter outfit.”

You’re darn right it is.

I am terrified the squirrel is going to somehow find its way into my apartment and then we will have a whole new situation to deal with.  I also don’t want to share my deck with him when I’m out there, because if it touches me, I’ll lose it.

I was out there reading yesterday morning when it tried to make its way over from the neighbor’s.

I may have yelped, jumped up, and ran inside to the safety of my apartment.

One of them will just stand there on my railing and look at me through the screen door as I holler at it to “GO AWAY!” and clap my hands to make noise, unphased.

Did you know there is an eHow on how to get rid of squirrels from your deck?  I don’t think it was drafted for apartment dwellers, but I’m going to give some of their tips a try anyway.  Unfortunately, I don’t have a dog or a cat to put out there, and I don’t have a lawn to pile acorns on as a diversion either.  I am going to try the chilli powder and soap though.  I just need to get some non-fruity smelling, stinky soap that he really won’t like.

Anyway, so as you can see, it was difficult for me to work up the courage to fire up the grill.

When I did, that pepper salad and this chicken were the spoils of my labour.

And who do you supposed showed up after I finished BBQ-ing?  Mr Belligerent Squirrel was out there sniffing around the deck by the BBQ.

Anyway, if you have any suggestions for getting rid of squirrels, I would greatly appreciate them! 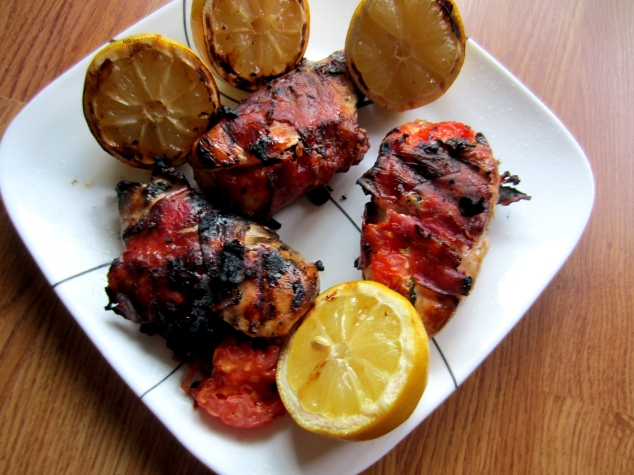 2 lemons, cut in half

Preheat grill to medium.  Brush the chicken with olive oil.  Cook until cooked through, ideally turning only once.  This is where I had some issues.  It was windy and some of my burners kept going out.  I ended up turning mine a few times, because I wanted to make sure they weren’t burning.  I probably ended up cooking mine for a total of about 30 minutes.  The original recipe said to grill 10 minutes, turning once and then move to a cooler part of the grill for five minutes until no longer pink.  Mine definitely needed more time than that.  Once cooked, transfer to a plate.

Grill the lemons for the last five minutes or so, until they get some color.

Combine the oil and pesto and drizzle over the plated chicken.  Serve with the grilled lemon halves (they get nice and juicy).

* Note:  I think most of the cheese ended up melting into the BBQ.  I’m not sure if this is because I didn’t do a good enough job of wrapping the chicken with the prosciutto to seal it in or not.  Next time I might try two pieces of prosciutto to see if that helps.  I’m also thinking this might be good done in the oven in the winter.

P.S.  A Freckle In Time is now on Facebook!  See the link to the right to “like” it!  I wish I could make a “dislike” button for squirrels.

One thought on “Grilled Chicken Caprese”