I am the worst blogger ever.  It’s fourteen days into 2013 and this is my first post of the year.  Oops.

I wish I could say it was because I was busy.  But actually, it’s mostly due to the fact that I’m having the hardest time getting back into a routine.  My schedule has been all thrown off since the holidays and due to having to go into the city for an appointment last week.  Hopefully things will start to get back to normal soon.

So basically, lately I’ve been working on eating all the candy I got for Christmas, pinning up a storm on Pinterest, and trying to watch the entire season of Project Runway that my DVR so thoughtfully recorded for me on Christmas Eve Eve.

Let’s just take a minute and reflect on the fabulousness of Heidi Klum.  Not only does she look amazing, even after having four kids (I bet she doesn’t eat Christmas candy or log way too many hours on Pinterest instead of exercising), but she gets to wear some fabulous outfits!  And sometimes she just wears them for like two minutes.  Just long enough to show up on the runway and tell the designers what their challenge is going to be.  She wore some fabulous sparkly dresses in season 10.  And her hair is always done so nice too!

Now let’s take another minute to reflect on how I want a makeover and for the Project Runway designers to make me clothes.  Someone needs to teach me how to accessorize and put creative outfits together.

Anyway, so now that I’ve finished off Season 10 of Project Runway, perhaps I can get on with my life and find some motivation to be productive again.  I’ve got a lot to do in the upcoming months!  I need to start practice teaching some yoga classes to real people.  Eep!  This is a feat that is proving challenging for a couple of reasons.  1.  I need to find time to plan a class.  2.  I need to find people to teach, which is hard both because I don’t know many people in town and the ones that I do, I don’t know if I want to embarrass myself in front of them.  3.  I need to find a time that works for both me and said people to actually do the class.  I had two people lined up for yesterday, but it was postponed due to both my potential students being ill.

And I also need to feed myself. 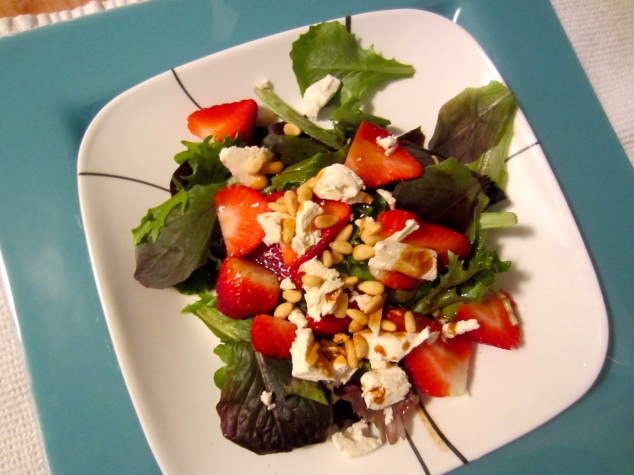 And that’s where this salad comes in.

I needed something for supper that wouldn’t make me feel like a gluttonous sinner, because I’ve been doing enough of that for the past couple of weeks, but I still didn’t want to deprive myself on taste (hence the goat cheese).  Plus I wanted something easy, because I wasn’t feeling overly motivated to actually cook anything.

1 cup of mixed salad greens, I used a Mesclun mix

Place all ingredients except dressing on a plate or in a bowl.  Drizzle desired amount of dressing on top of salad and toss (you will have dressing left over). 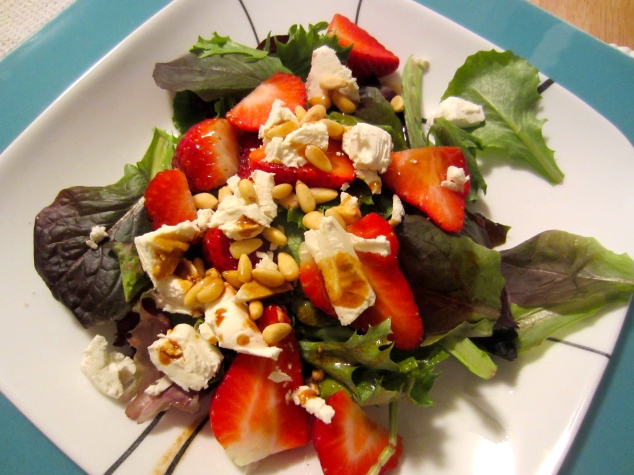 Maybe not a plateful of chocolate, but it will do.  Would be delicious served along a nice piece of grilled chicken.

One thought on “Strawberry and Goat Cheese Salad”