Tomorrow will be the first Mother’s Day that I don’t have a mom to celebrate with.

After Dad found those poems in Mom’s file she’d saved and I found them comforting, I searched for more memorial poems on Pinterest and found so many lovely ones.  Looking at poems on the internet doesn’t quite have the same feel as holding a yellowed newspaper clipping, but they were still touching.  I was inspired to write my own memorial poem.

I haven’t tried to write a poem in years, not that I ever was much of a poet to begin with.  Although, there was that one epic grade eight English assignment known as “An Anthology of Karen and Natasha’s Poems,” which earned us an Outstanding++ grade, that I re-discovered tucked away in a drawer when I was home visiting Mom at Easter.  Finding that gave me a laugh.

This is what I came up with for my memorial poem, and I’m actually pleasantly surprised with how it turned out. 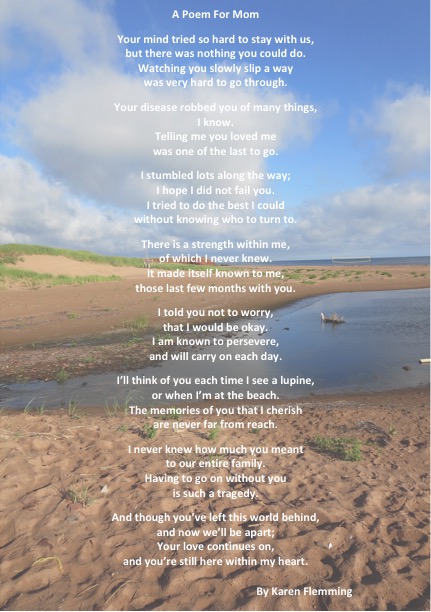