It’s been three months since Mom passed away, yet somehow it still doesn’t feel real or quite make sense.  Surely, she should be showing up to sit with me on the deck while I drink my morning coffee, joining her circle of friends to gossip on the beach, and always making sure I get one last swim in before I have to leave the cottage.

Unfortunately, she isn’t and that’s the reality of it.  Death is permanent and irreversible.  There will be no one last ice cream cone or walk on the beach, and I’ll never have a hug from my mom again.  I’ll have to settle for drinking my coffee out of the mug with her name on it.

A mother’s love is unconditional and irreplaceable, and while watching Alzheimer’s Disease steal my mother from me, I felt like that love and support was missing for years, but now I realize that it wasn’t as gone as I thought it was.  I thought losing her physical body wouldn’t be so bad because I’d already lost so much.  The truth of the matter is, although it was hard watching Mom struggle with her illness, you couldn’t get up and go as quick as you’d like because Mom would need help putting on her coat and shoes, and it was hard listening to her protest as Dad tried to give her her pills or help her in the shower, she was still here.  There were still sweet moments when she would make a joke and I could still give her a hug…  Do I ever wish I had given her more hugs.  It was very difficult emotionally, but it’s a whole other kind of emotional pain now.  And a void.  I don’t have a mother on this earth anymore.  That’s a tough pill to swallow and I think my brain is still trying to process it.

One of my mom’s friends, who has also lost her mother (another special lady, who lived a long, happy life) said that it doesn’t matter how old your mother is, it’s still hard, and after her mom passed away she told a friend that nothing felt the same.  Her friend didn’t understand what she’d meant at the time.  Recently that friend lost her own mother and said that now she understood.  My sister echoed similar thoughts.  She’s had friends who’ve lost their mothers to cancer, and while at the time she knew what her friends were going through was sad, she didn’t fully understand just how sad and difficult it was for them until we lost our mother.  Maybe it’s something you just can’t understand unless you’ve been through it yourself.

I agree with Mom’s friend.  Nothing feels the same.  Something is missing.  I’m told it gets better, but that “different” feeling never completely goes away.  I’m told to remember the happy memories, and there are lots of them to choose from.  I’m told it gets easier with time.

Shouldn’t I have a very carpe diem attitude now?  After all, I’ve been through cancer and now I’ve lost my mother and I’m only thirty.  Instead, I feel like my focus has narrowed and the thought of the future exhausts me.  I have no desire to plan an exciting vacation or make plans for months down the road.  Trying new recipes and cooking doesn’t even interest me that much right now.  Small things like paying bills on time and RSVPing to weddings feel like daunting tasks.  It’s like all I can think about is getting myself to work, which at least distracts me for a little while.

I’m so grateful I was on vacation last week.  I’ve never felt like I needed a vacation more than I did a week ago.  I spent my vacation at my parent’s cottage.  I guess I can’t call it my “parents’ cottage” anymore since I only have one parent now.  I never thought of that subtle difference between parent’s and parents’ until now.  I’ve been having an internal struggle over what to call the cottage now.  it just doesn’t feel right to call it “Dad’s cottage” because it was always more Mom’s than anyones, and in my mind I guess I still think of it as belonging to both my parents.  Can it still belong to both of them, even though one of them is gone?

I still feel this loneliness that must result from the lack of a mother’s unconditional nurturing and support, but it was easier being on PEI.  There were lots of family and friends around and I could talk about Mom and ask them questions about her.  There were people who’ve lost their own moms, so they understand what I’m going through.

I honoured Mom by baking biscuits using her recipe and eating strawberry shortcake.  I took bouquets of lupins and peonies to her grave.  I wrote “Mom” in the sand and watched the waves wash it away.  I didn’t have to worry about day to day responsibilities or ringing phones or people waiting for me.  I could eat my meals uninterupted.  All I had to do was read my book, cross stitch, go to the beach, and the most strenuous thing I had to do was help Dad a little bit with supper and doing dishes.  I hunted for blue sea glass everyday and I thought that if I found one, it would be a sign form Mom that she was watching over me.   I had found a piece of blue sea glass the day of Mom’s burial, back in June, but I didn’t find any this visit and I was extremely disappointed.  I was jealous of other people when they found pieces.  Eventually, I had to stop searching so hard because it was making me feel worse.   Maybe I’m being unrealistic expecting her to provide me with blue sea glass everyday, but I want to feel comforted.

My sister and I have noticed that people will often ask us how our family members are doing, but not ask us directly how we’re feeling.  I’m sure it’s because no one knows what to say.  There are no magical words to fill the void.  There is no perfect thing to say.  How does one even answer that question, “How are you doing?” anyway?  Try to be strong, and say “Alright.”  The more truthful, but still socially acceptable, “Some days are harder than others.”  Or the most honest answer, that I still feel like crying somedays.  That I’ve fought back tears at work and that my eyeballs have been known to start leaking at yoga, prompting strangers to ask me if I’m OK.  Maybe people don’t even need to ask that question.  Just say hello so the grieving person knows you’re thinking of them.  Show your support just by being there and being understanding. 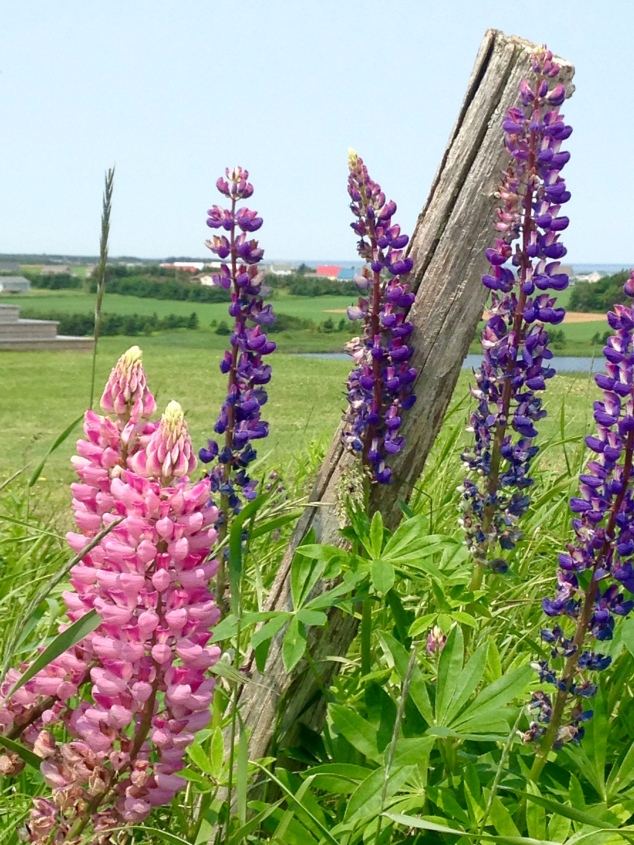 Dad and I were driving along one of my favorite routes on PEI, taking in the stunning views of farmers’ fields, Malpeque Bay, and the pink, purple, and white lupins that lined the ditches, when I said to him that I thought PEI was the prettiest province in Canada.  He said, “Do you think you were influenced at all?”  Mom had always had an intense love of all things PEI, and you know what?  I am my mother’s daughter.

One thought on “What Grief Looks Like Three Months Out”