I spent a sunny afternoon at Starbucks the other day.  If you can’t read on the beach, you might as well read on the Starbucks patio with an iced coffee and a brownie. 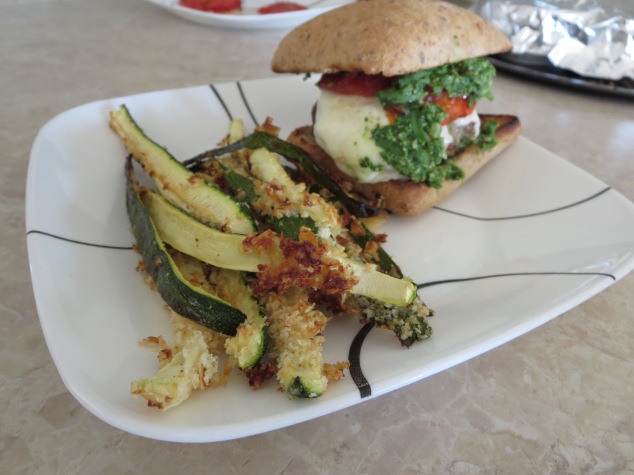 Unfortunately, it’s hard to read when you’re trying to eavsdrop on the two couples sitting at the table behind you.

From what I gathered, one couple was visiting from Ottawa.  And they were talking about open bars and weddings, and hiking the Inca Trail to Macchu Pichu, and I really wanted to join in on their conversation, and perhaps make some new friends.  But that would have been weird, right?  Is it socially acceptable to just join in on someone else’s conversation?  Probably not, eh?

But, like, what would they have done if I had turned around and said “Oh, hey, you hiked the Inca Trail?  Cool.  My boyfriend really wants to do that, but I have a lot of reservations about it.  Like what is the bathroom situation like?”

I didn’t say anything.  I just kept reading my book.  So I guess we’ll never know.

But maybe that’s how people make new friends when you’re an adult in the real world.  By butting in on strangers conversations.

Once they left I could focus on my book again.  Then I went home and made supper.  And what a supper it was!

I was in the mood for burgers, but I didn’t know what kind.  And then I saw this recipe from my old buddy Martha.  I’ve often grilled portobellos and topped those with pesto for a quick and easy supper.  But never had I thought to put the pesto IN the  burger.  Such a super fantastic idea!

I tweaked it a bit by adding some lemon juice to the pesto and using whole wheat ciabatta buns.  I considered swapping out the walnuts for pine nuts, but the grocery store was out, so walnuts it was.  Plus walnuts are cheaper anyway.

The pesto is totally adaptable.  Swap out the herbs, greens, or nuts for whatever you’re feeling.  I’m sure arugula instead of spinach would be fab!

I made a side of these zucchini fries from Weeklybite, which I’d pinned the recipe for ages ago and finally just got around to making.  They made a great side dish.  And they’re a vegetable.

I felt all fancy with my pesto burger and zucchini fries.  So much flavour from the pesto!  And the cheese is all melty and the tomatoes soft and juicy.  It’s such a shame I didn’t have a bottle of wine chilled to go with it.

In a food processor (or blender), process basil, spinach, garlic, walnuts, and lemon juice until comes together as a nice pesto sauce.  I used my Vitamix and had to add a little extra lemon juice to get the pesto to come together.  This probably wouldn’t be an issue in a food processor.

In a bowl, combine 1 tbsp of the pesto, the chicken, and some pepper.  Use your hands to mix until combined.  Don’t over mix.  Bring mixture together into a big round disk.  Score with the side of your hand into 4 equal portions.  Form each quarter into a burger, making an indent so it’s thinner in the center.

Brush burgers with oil.  Place on grill.  Cover.  Cook for about 10 minutes.  Flip and continue to cook for another 10 minutes or so until burgers are cooked through completely.  We don’t want any raw chicken!  Cooking time may vary depending on the thickness of your burgers and your grill.

After flipping the burgers, drizzle the tomato slices with olive oil and place on grill.  Cook for about 2-4 minutes until slightly charred with grill marks, then flip and cook another 2-4 minutes.

When burgers are almost done, top each burger with a mozzarella slice to melt.  Place your buns on the grill (I use the top rack) for a minute or two to get a little colour.

To serve, spread some of the remaining pesto on both sides of bun, top with a burger and two tomato slices.  Yum! 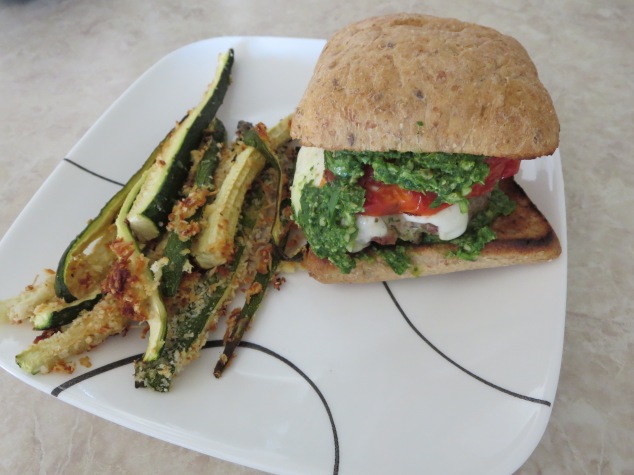 Look at that green pesto!

This is it right here.

And not homemade gnocchi, like that time I tried it and didn’t mash my potatoes up completely.

I’m talking using store bought pre-made stuff and jazzing it up with pesto to make it uber delicious!

Now, I can’t take credit for the idea of this dish.  It’s my attempt at recreating a lunch I had at Presto! Pastaworks, a super fantastic lunch spot that happens to be in the food court at a mall… which just so happens to be the mall with the fantastic fresh produce AND the candy store.  Oh, and the most Irish-ty pub with the trivia questions is in that mall too.

Anyway, this meal is quick to throw together when you’re short on time, but it’s full of flavour and yumminess!

Inspired by a dish from Presto! Pastaworks, a delightful little lunch spot that doesn’t have a website

1 pkg (500 g) gnocchi (or whole wheat gnocchi if you can find it), often sold with the refrigerated fresh pastas at the grocery store

1/4 to 1/3 cup pesto, depending on how pesto-ey you want it (I used homemade arugula pesto, but store bought will do the trick too)

250 g fresh mozzarella, buffalo mozzarella if you can find it

Parmesan, for sprinkling on top

Boil a pot of water and cook gnocchi per package directions.  Once the water is boiling, basically you throw the gnocchi in the pot and cook until they float which doesn’t take very long.

Meanwhile, as the water is coming to a boil, heat a skillet on medium heat with the oil.  Add tomatoes and cook for a few minutes, until they blister a bit, but before they break down and start bursting.

When the tomatoes are done, turn off heat and stir in pesto.  Remove the cooked gnocchi from the pot with a slotted spoon and transfer to the skillet with the pesto and tomatoes.  Toss/stir/mix however you can to coat the gnocchi and tomatoes with the pesto.  Add the cubed mozza.

To serve, spoon onto plates and top with a bit of grated parmesan.

(P.S. It was one year ago today that I posted my first blog!  I’ve come a long way in one year 🙂  If I was a ‘good’ blogger I would have made a cake or cupcakes or something with a candle in them… but I’m sharing gnocchi with you instead because ain’t nobody got time for that!)

Luckily, I had this in my archives.  Due to my virus, I haven’t cooked anything more complicated than a boiled egg in the last week, and I’ve been popping ibuprofen and acetaminophen like candy.

I think the worst is over, knock on wood.  The high fever seems to be gone, and I’m left with a headache now.

I am the WORST sick person EVER!

Whenever I get sick, I am convinced I have some deadly disease.  It’s horrible.  I’ve always been like this, ever since I was a little kid.  That’s why I’m so terrified of pandemics.  And the worst part is, that two years ago, I went to outpatients with what I thought was a chest infection and ended up finding out I had lymphoma.  I’m glad it was picked up on so I could get treatment, but at the same time, it validated my irrational fear.

Being sick and living alone is also the worst.  It’s nice to have someone there to bring you juice, make you food, buy you more ibuprofen and popsicles, and rush you to the hospital if need be.  I was lucky Michael was around for part of the week, but the last few days I’ve been on my own.  I’m starting to feel better, but I’ve decided I definitely don’t like being sick and alone.  I’m so lonely and bored.  I can’t wait to go back to work.

And I don’t like the interruption to my life.  I hate calling in sick, because I know it’s difficult to get my shifts covered and I hate other people having to work extra for me.  I missed going on a pub crawl Saturday night.  And my apartment is in shambles!  I missed my “get sh*t done day” because of the damn fever so my apartment is desperate need of a cleaning and I’m running out of clean underwear.

So if you’re not sick, and in the mood for pizza, give this a try.  It’s one of my favorite pizza recipes! 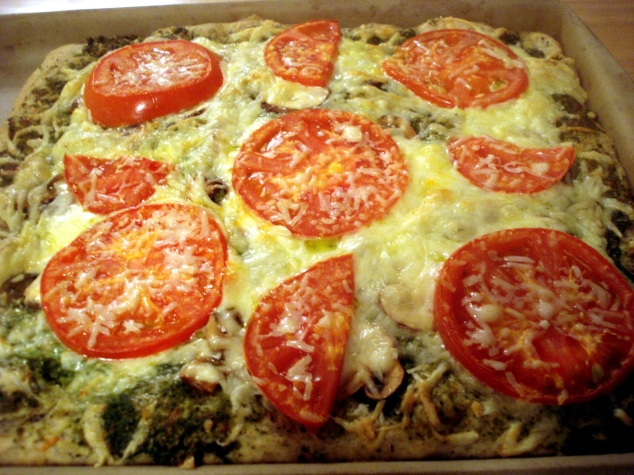 Arugula Pesto Pizza
Herby Whole Wheat Pizza Dough (see below)
1/2 cup Arugula Pesto (or you could use basil pesto, homemade or store bought)
1/2 – 1 pkg mushrooms, sliced (I used mini portobellos this time, but I’ve made it with white mushrooms in the past)
1 large tomato, sliced
Mozzarella cheese, grated
Parmesan
Preheat oven to 375º.
Saute mushrooms in a frying pan over medium heat in a non-stick frying pan until browned.  I suppose you could use oil if you wanted to, but I didn’t.
Spread dough out on pizza stone or in pizza pan.  Top with pesto.  Top with sautéed mushrooms.  Then spread with mozzarella cheese.  Top with tomato slices.  Sprinkle with a spoon or two of parmesan.
Bake for 25-30 minutes until crust is golden.
Herby Whole Wheat Pizza Dough
(adapted from Lacey Hubbard’s Homemade Pizza Dough in one of those community cookbooks)
1 cup white flour
1 cup whole wheat flour
1 tsp sugar
Pinch of salt
1 tbsp yeast
1 cup water
2 tbsp olive oil
1 1/2 tsp garlic powder
1 tbsp onion flakes
1 1/2 tsp dried basil
1 1/2 tsp dried parsley
1 1/2 tsp dried oregano
Heat water in microwave until slightly warm (like 20 seconds or so).  Stir in the sugar until dissolved.  Add yeast and salt.  Let sit until foamy and yeasty (about 10 minutes).
Pour yeast mixture into the bowl of a stand mixer fitted with a dough hook.  Add oil, all of the whole wheat flour, 1/2 cup of white flour, and the herbs.  Mix on speed 2 for a minute.   Add the rest of the flour and mix on speed 2 until the dough forms a ball and the planetary action of the mixer cleans the sides of the bowl, just like the shopping channel said it would (about 2 minutes).
Place dough in an oiled bowl, covered with a damp towel in a warm place and let rise for 30 minutes.