I’m in the market for some new traditions.

But if they’re “traditions” why are you looking for new ones?

Christmas has been getting me down these last few years.  I am a working adult who, although I am a professional, works in a retail environment and therefore does not get the glorious Christmas vacation that, as a student, I took for granted.   I do not live in the same town as my family, so my Christmas has essentially been whittled down to Christmas Day and Boxing Day, but if it falls just right, maybe even Christmas Eve too.  After Boxing Day, it’s back to work and Christmas is essentially over.  Festive feeling over.  Christmas tree lights start to seem depressing.

Add to the above, my mom has early onset Alzheimer’s disease so she’s there, but she’s not really there.  I never realized just how essential my mom was to making Christmas Christmas until she was no longer capable of doing it.  For as much as Dad tries, the Christmas morning spread of stockings and presents and candy just isn’t the same.  It’s the subtle things I miss… like how Mom used to wrap all our stocking gifts in the same wrapping paper that wasn’t used for any other presents because it came from Santa’s workshop in the North Pole.  How she would arrange our ginormous stockings with an unwrapped present from Santa around the living room, so that if you were up before everyone else, you at least got to see what everyone got from Santa.  How she bought cashews every year until the year she forgot to get the candy and the cashews.  I was so disappointed and hadn’t accepted she had Alzheimer’s yet, so I was mad at her.  I still feel horrible guilt over that.

Since getting a full week or two off at Christmas and jetting off to Mexico or Hawaii and skipping the whole thing isn’t possible, this year I’m putting more of an effort into finding ways to make it better.

And while I will carry on the tradition of making shortbread, even though every year the dough gives me grief and I find myself having a meltdown in the kitchen Christmas Eve, it’s time for some new ones.

Ideas I’ve been thinking of include making breakfast casserole for Christmas morning, downsizing from doing a full turkey to a couple of turkey breasts (because I just can’t bring myself to reach inside a turkey to pull out the giblets or stuff it), making a cheese ball for Christmas Eve, and some new cookies.  Like these biscotti.

I may have mentioned before, the day my Food Network Magazine arrives in the mail is my favurite day of the month. Especially the Christmas issue.

This year the biscotti recipe caught my eye.

Biscotti has always been on my radar of something I’d like to try baking, but it’s always kind of frightened me too.  After baking a batch, I don’t know why I was afraid.  They’re not hard to make at all.  You just shape the dough in two logs, throw them in the oven for a bit, take them out and slice them up, then bake them some more to dry them out good.  Easy peasy.  No cookie cutters or rolling out dough involved.  And as I mentioned above, dough can sometimes give me grief. 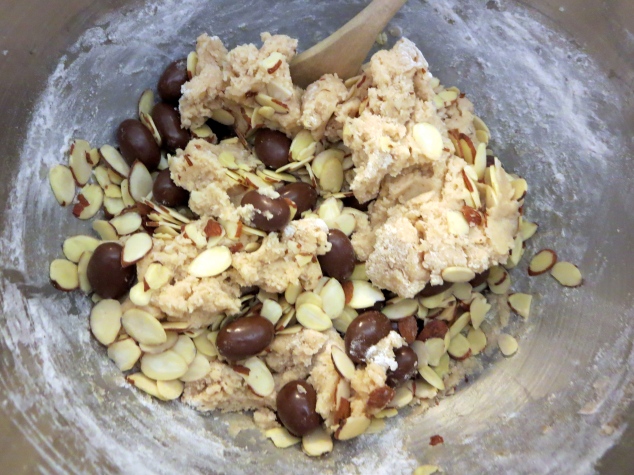 Whisk flour, baking powder, and cinnamon together in a bowl.  In a separate large bowl or the bowl of your stand mixer, beat the butter and sugar on medium high speed until light and fluffy which will take about 3-5 minutes.  Then add in the eggs, amaretto, and extracts until combined.  Reduce speed to low and gradually add the flour mixture until just combined, being careful not to over mix.  Turn off mixer and fold in both kinds of nuts with a wooden spoon or rubber spatula.

Dust your hands and the dough with flour.  Divide your dough ball in half and shape each into logs that are 3 inches wide and 12 inches wide.  I even got out my measuring tape.  You can do this right on your prepared baking sheet.  Separate the logs from one another by 3 inches.

Bake until puffed and set, which should take about 25 minutes.  Let cool 10 minutes on the baking sheet then transfer to a cutting board.

Reduce oven temperature to 250º.  Slice your logs crosswise into 1 inch slices.  I used a serrated knife and it seemed to work well.  Put the slices on the baking sheet cut side down and bake another 45 minutes flipping halfway.  Cool completely on the sheet.

Melt each of your chocolates in a separate bowl by microwaving in 30 second intervals, stirring in between each until chocolate is melted.  Drizzle chocolate on biscotti.  I tried using both a fork and a spoon.  Both work but I found the fork gave finer chocolate ribbons, while the spoon made a thicker chocolate ribbon.  Let set for 30 minutes.  Store in air tight dish at room temperature.

So give a batch a try!  And if you have any ideas for new Christmas traditions, please share.